The Exit Light Company is proud to feature a selection of Emergency Lighting for Homes. These multi-purpose lanterns and flashlights are kept ready through standard AC outlet or USB charging ports, and can provide hours of light in the event of power outages. For longer outages, they can be further recharged with USB power banks or direct solar.

These multi-function devices are useful for more than just emergency backup lighting. They provide plenty of light for camping and hiking, or can even function as everyday work/task lights, as well.

It’s a three-peat! For the third year in a row, The Exit Light Company has been awarded with the prestigious Spectrum Award for Excellence in Customer Satisfaction.

The Spectrum Award of Excellence in Customer Satisfaction was established to spotlight companies and business professionals providing exceptional service and experiences to their clients and customers.

The Exit Light Company appreciates that our efforts at providing exceptional products with exceptional service are recognized. We will continue to strive for excellent customer satisfaction.

The Exit Light Company is pleased to announce the opening of our newest shipping center in Wichita, Kansas. Our new mid-west facility allows us to provide affordable 2-day delivery service to most of the central United States. We have always prided ourselves on providing quality customer service, and one of our hallmarks is our fast turnaround from order to delivery. The new fulfillment center in Wichita allows us to reach even more of the continental United States with quick, efficient and affordable product delivery! And because we pay less on shipping, we can pass those savings on to our customers, or continue with our offer of free ground shipping on orders of 6+ items* to our customers (*Some restrictions apply). Our customers can expect our same world-class customer service, free shipping, but now can expect even quicker delivery!

For the second year in a row, The Exit Light Company has been awarded with the prestigious Spectrum Award for Excellence in Customer Satisfaction.

In partnership with The Stirling Center for Excellence, City Beat News (CBN) recognizes companies that provide an outstanding customer experience and honors them with the Spectrum Award. Winners are based on CBN’s independent, proprietary research and evaluation system, which identifies businesses with a track record of top-flight customer service and customer satisfaction. The rating system combines data collected from nominations, online and other customer reviews, surveys, blogs, social networks, business-rating services, and other honors and accolades — all of which express the voice of the customer.

The Exit Light Company appreciates that our efforts at providing exceptional service with exceptional products are recognized. We will continue to strive for excellent customer satisfaction.

The Exit Light Company strives to provide accurate and useful information to our customers and make the online shopping experience a seamless one. As part of a site redesign rollout in June 2012, our product pages were updated to be more user friendly. We have had fantastic feedback with these changes and would like to draw your attention to one of the more recent additions.

One question regularly asked of our Customer Service Team is: Does this unit include a battery? We’ve now provided an easy way to find the answer to this question with each product on our website displaying our “Battery Included” symbol.

The Battery Included symbol will appear on the Features tab of the product page, along with a variety of other symbols representing certifications and other attributes that apply for that product. If this symbol does not appear, the battery is not included (but may be available as an option for that particular product). Don’t forget to check out the Description and Technical Features tabs for additional information on the product. As always, help is available via on-line chat, phone (877-352-3948) or email (orders@exitlightco.com) from 5am-5pm PST if you have additional questions or require assistance in placing an order!

The Exit Light Company is proud to announce its inclusion in Internet Retailer’s Second 500 Largest E-Retailers July 2011 issue. The ranking is based on growth, size, category and sales of e-retailers nationwide.

Jeannette Carrico, Exit Light Company CEO, said “We could not have achieved this honor without our loyal customer base and excellent staff. We strive to provide exceptional products and customer service support, which in turn allows our business to continue to grow.”

The Exit Light Company was selected as one of the Nations “Top Businesses” by DiversityBusiness.com for distinguishing itself as one of the most outstanding entrepreneurs in the country. Jeanette Carrico, CEO, will be honored at the “11th Annual National Business Awards Ceremony and Conference” to be held April 19-21, 2011 in Washington, DC. 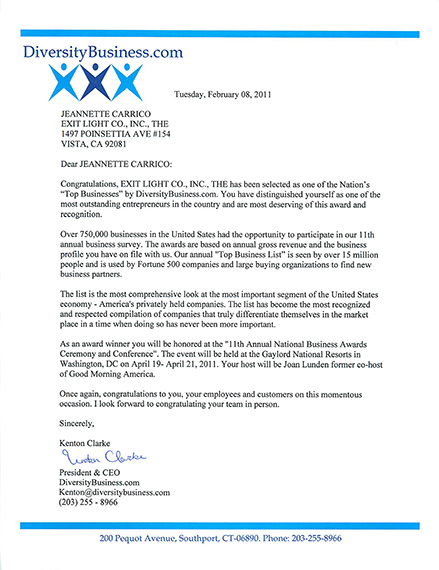 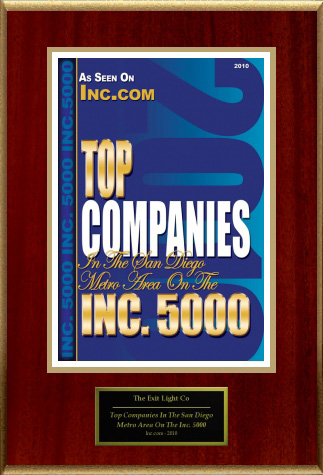 She comes across as modest and unassuming, proud of her accomplishments yet wary of praise and not at all eager to talk about herself. But Jeannette Carrico, founder and CEO of The Exit Light Co. and recipient of the Small Business Person of the Year Award from the San Diego district office of the Small Business Administration, is nothing short of a trailblazer.

Inspired by what she perceived to be an unfulfilled niche in the emergency lighting industry, Carrico helped generate the idea of providing a service that would maintain these systems according to federal and state mandates in April 2000 while residing on the East Coast with her husband, Paul, now the company’s CFO. The couple founded the company with two other partners, who left early on amidst initial struggles. In 2003, the Carricos moved to San Diego County to be closer to family and found new ways to expand their Vista-based business, which currently serves over 35,000 customers in all 50 states as well as internationally.

“We realized we could make additional revenue by retrofitting businesses with more current products,” says Carrico. “Soon after, we launched our e-commerce store, which allowed us to expand business contacts and lay a foundation for providing low-cost, quality products and good customer service.”

The Exit Light Co.’s business model includes working directly with manufacturers in order to obtain privately labeled products that are quality-assured and low cost. With safety and energy-efficient, environmentally friendly products as closely guarded values, the company proved in at least two separate case studies that some of their products reduce wattage by 80 percent without losing performance.

“The continued growth and success of the company shows that there is value in engaging in a business built around the concept of increasing public safety and risk management,” Carrico says of her company, which grew from three employees in 2000 to 12 today.

Asked why she believes the SBA chose to recognize her and what has contributed to the company’s success, Carrico cites unlikely odds and dogged determination.

“I’m a woman in a male-dominated industry,” she says. “I was involved from the inception of this company, and I’ve always had this drive to make it succeed.”

Carrico, who grew up in the Carmel Valley area, says a mutual drive to succeed brought her and her husband together when they first met at a friend’s wedding. Now married for close to 17 years, Carrico believes their shared values and goals have propelled them to prosperity. “We really formed a great partnership from the beginning,” she says. “It was a foundation that made it easier for us to enter this business together.”

While Carrico manages correspondence, daily operations, marketing, graphics and design, her husband prefers to stay behind the scenes and manage finances. “We’re different, yet alike enough — or should I say alike yet different enough — that being in business together works for us,” she laughs.

Philanthropy is second nature to Carrico, to the extent that she doesn’t think to mention it unless pressed. Opportunities to contribute abound, and she uses insight and creativity to find the most profound uses for The Exit Light Co.’s carefully carved niche.

“In the wake of Hurricane Katrina, we were able to contribute extra signage and emergency lighting to nonprofit organizations to assist with rebuilding,” Carrico says as an afterthought. “We’re trying to fulfill a need that can help businesses succeed and save lives.”

Disaster played a significant role in the Carricos’ inspiration for founding The Exit Light Co. Both worked in offices across the river from the World Trade Center during the Sept. 11, 2001 terrorist attacks.

“We personally witnessed that horrific event,” Carrico recounts. “I kept thinking of all those people stuck inside who couldn’t find their way out, and how terrifying it must have been.”

Carrico says that on average, four out of 10 commercial buildings today lack functional emergency lighting. “We’ve heard of nightclubs burning down, people who have lost their lives because they couldn’t find the door,” she says.

Despite the company’s progress, and accolades she has garnished in the last decade — including three other business awards this year alone — Carrico says she constantly seeks new avenues for improvement. “We may have 95 percent of our orders shipping out the same day,” she says. “But I always find myself thinking, can’t we make it 96? Our customers are satisfied, but can’t they be ecstatic?”

She extends the same rigorous self-reflection to her employees, and personally screens every new addition to the company. “We try to be good listeners and encourage active communication, in addition to looking for the usual qualities like dedication, self-motivation, diversity and the ability to prioritize,” she says. “We like our company to feel like a family.”

“We strongly believe that you can’t ask an employee to do something you can’t do yourself,” she says. “It helps that we’ve created this business from the ground up, so we know everything about how it functions.”

Part of that includes helping staff reach personal goals. “I’m always challenging them to see how we can all improve as individuals in our job responsibilities,” she says. “This improves the bottom line and improves their happiness within the company.”

Carrico says she believes her employees’ diverse backgrounds are part of the company’s success. “Our employees deal with customers across the nation and the world. Diversity is so important to society today, and it allows our staff to relate to a wider range of people.”

The Exit Light Company CEO, Jeannette Carrico, is a winner of the 8th Annual 2010 Enterprising Women of the Year Awards, an annual tribute to North America’s top women entrepreneurs. The award winners were recognized during a three-day tribute held in their honor March 17-19 at the Marriott Doral Golf Resort & Spa in Miami, Florida.