Non-Electric Exit Signs have increased in popularity over recent years because of their energy efficiency, ease of installation and decreased costs.  An exit sign that does not require electricity to operate is clearly the most energy-efficient.  Compared to Hard-Wired Exit Signs, Non-Electric Exit Signs don’t connect to a building’s power supply, which results in a faster & cheaper installation, while additionally reducing long term costs of power consumption and maintenance.

What Non-Electric Exit Sign is better?  Let’s briefly discuss the difference between Tritium and Photoluminescent Signs and then weight the Pros and Cons.

Photoluminescent (power free) exit signs require no electricity (AC) or battery power to work. They are illuminated via photoluminescence (“glow-in-the-dark”). Since no AC connection is required, installation is incredibly simple and does not require access to conduit, an outlet, or the services of an electrician (minimal installation costs). Since no power is consumed, there is zero lifetime power consumption cost! Since there are no electronics or batteries, these signs also enjoy zero maintenance costs!

END_OF_DOCUMENT_TOKEN_TO_BE_REPLACED

The Exit Light Company is proud to present their new line of commercial exterior fixtures with an emergency option. These products are available as a regular lighting fixture, a fixture with emergency ballast or the emergency light only. From floodlights to canopies, we carry a wide variety of fixtures to suit your application. They are architecturally pleasing with die-cast aluminum housing in a bronze finish. All units utilize CFL light bulbs and are listed for damp or wet locations.

Check out the products individually on our emergency light fixtures page. Feel free to give us a call to discuss your needs and determine which fixture will fit your application! 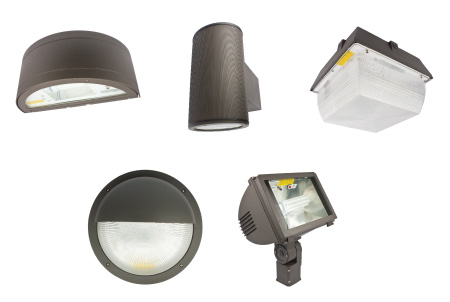 Can you believe another year is almost over? The year 2010 is approaching fast and we want to thank all our loyal customers for making 2009 a great year for the Exit Light Company! We want to remind you that the end of the year is a very important time for maintenance crews of shopping malls and buildings to ensure customer safety. With staggering crowds streaming to shopping centers it is critical that all safety measures are up to standard. This means testing all exit and emergency lights to ensure that they are working properly in case of an emergency.

Routine maintenance of exit and emergency lighting is frequently overlooked until an emergency occurs, which is often too late. According to the NFPA Standard No. 101, chapter 31, section 1.3.7. “A functional test shall be conducted on every required emergency lighting system at 30-day intervals for a minimum of 30 seconds. An annual test shall be conducted for the 1 1/2 hour duration. Equipment shall be fully operational for the duration of the test. Written records of visual inspections and tests shall be kept by the owner for inspection by the authority having jurisdiction.” Some of our exit signs and emergency lights have an automatic test feature that will self-test every 28 days for 5 minutes and 90 minutes every 6 months. This self-testing feature allows you to simply look up at the indicator light on the sign to see if it is still functioning properly.

If your exit and emergency lighting does not offer this feature, the Exit Light Company offers testing and repair services within California. Our certified electricians will test and repair your lights and will also provide you with written records indicating what was tested and the outcome/recommendation. We offer monthly, quarterly and annual testing service. Rely on real professionals to avoid serious liability and save money.

Our Testing Procedures for Exit and Emergency Lights include:

Contact our service department at (877) 352-3948 to arrange for your testing service today!

The debate on how to save the environment has been going on for decades. Recently, new restrictions have been going into effect across most of the European Union in an endeavor to cut greenhouse emissions. The sale of incandescent bulbs has been banned across Europe. This is the continent’s latest effort to get people to save energy and fight global warming.

Restricted from selling incandescent bulbs, companies in Europe now have to switch to the new compact fluorescent lamps, which use up to 80 percent less energy and do not burn out as quickly. According to James Kanter from the New York Times, “A bulb can cost €10 ($14 USD) or more, depending on type — whereas traditional incandescent bulbs cost about 70 cents each. But E.U. officials argue that the energy savings would cut average household electricity bills by up to €50 a year, amounting to about €5 billion annually. That would help buoy the economy if consumers spent their savings.”

Why the ban on incandescent bulbs?

The reason for the ban is the E.U.’s goal of cutting greenhouse gas emissions by 20 percent by 2020. The E.U. is implementing new energy-efficient ways to save the environment. Everything from televisions to washing machines are starting to be made with this in mind. The E.U. is not the only country banning incandescent light bulbs. Australia has already introduced the new light bulbs and Cuba is only using compact fluorescent bulbs. In the United States, incandescent bulbs are planned to be phased out in 2012.

James Kanter says: “E.U. officials sought to reassure consumers that they still would have plenty of choice, and that the changes would be gradual. The clear 60-watt bulb, one of the most commonly used, would remain available until at least September 2011, and clear 40-watt bulbs until 2012. E.U. officials said that they would find ways to push the industry to reduce the amount of mercury to levels around 2 milligrams per bulb from the current level of 5 milligrams per bulb.” But WWF, an environmental group, says standard halogen bulbs should also have been removed from the market. “Getting rid of incandescent bulbs is a no-brainer, but halogens are nearly as wasteful,” said Mariangiola Fabbri, a senior energy policy officer for WWF.

For over 10 years The Exit Light Company has carried environmentally friendly products, most of which use LED lights that are even more efficient than fluorescent bulbs. Many of the products meet or exceed ENERGY STAR guidelines. All of the exit signs have an input power demand of 5 watts or less per face. The LED Retrofit Kits convert older exit signs which utilize incandescent bulbs into vastly more energy-efficient LED lighting. We ship our products using packaging made from 100% recycled polystyrene that meets Green Cross certification standards for post and pre-consumer waste content. The Exit Light Company not only has their customers in mind but the environment as well.

The Exit Light Company is committed to providing emergency egress lighting and signage that is not only life-saving, but environmentally friendly. As a member of the U.S. Green Building Council (USGBC), a 501 (c)(3) non-profit organization committed to a prosperous and sustainable future through cost-efficient and energy-saving green buildings, we advocate the Leadership in Energy and Environmental Design (LEED) Green Building Rating System™, which encourages and accelerates global adoption of sustainable green building and development practices. The Exit Light Company sells a variety of products that are LEED® points eligible and can help your project or building become LEED® certified.

Many of our products meet or exceed ENERGY STAR guidelines. All of our exit signs have an input power demand of 5 watts or less per face. Our Photoluminescent Exit Signs and Tritium Self-Luminous Exit Signs operate have absolutely no power requirements. We carry LED Retrofit Kits to convert older exit signs using incandescent bulbs to utilize vastly more energy-efficient LED lighting. We also carry a full line of Photoluminescent Tape & Photoluminescent Emergency Egress Signs for all your emergency sign needs. Finally, we ship our products using packing made from 100% recycled polystyrene that meets Green Cross certification standards for post and pre-consumer waste content.

With your help, we can make a difference. Call us if have questions about how to make your emergency lighting or egress signage project more environmentally sound.

The “Featured Products” area of our storefront showcases those products that we feel are exceptional because of their value, design, or quality. This month, we are highlighting a category of emergency lighting which we feel meets all three of those criteria.

Providing adequate emergency lighting does not have to comprise architecture and design choices. Now you can have both.

The Exit Light Company is proud to announce that we have been selected for the 2009 Best of San Diego Award in the Lighting Fixture Repairing & Maintenance Category by the U.S. Commerce Association (USCA).

The USCA “Best of Local Business” Award Program recognizes outstanding local businesses throughout the country. Each year, the USCA identifies companies that they believe have achieved exceptional marketing success in their local community and business category. These are local companies that enhance the positive image of small business through service to their customers and community.

Various sources of information were gathered and analyzed to choose the winners in each category. The 2009 USCA Award Program focused on quality, not quantity. Winners are determined based on the information gathered both internally by the USCA and data provided by third parties.

The Exit Light Company appreciates the recognition and will continue to maintain our commitment to excellence.

The Exit Light Company is proud to announce that we have been selected as a finalist in the category Excellence in Customer Service by the San Diego Regional Chamber of Commerce in conjunction with the U.S. Small Business Administration.

Being listed as one the of the top 6 companies out of a field of over 245,000 Southern California Businesses is a great achievement.

Companies were judged on the following criteria:

The Exit Light Company appreciates the recognition and will continue to maintain our commitment to excellence in customer service.

The Exit Light Company is pleased to announce that we have been featured as a Spotlight Store by Miva Merchant. MIVA Merchant has provided reliable and flexible e-commerce solutions since 1995.

The Exit Light Company is pleased to announce that the new Product Catalog is available online at our website for immediate download.

This beautiful full-color 32 page catalog provides details for just some of the hundreds of exit signs, emergency lights, exit lights 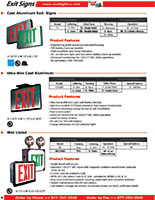 (exit sign/emergency light combos), and accessories that we carry. (We just couldn’t fit everything in!) Be sure to visit www.exitlightco.com for pricing, and to see an even larger selection of products.

We take great pride in our industry leading pricing and service. For nearly a decade, 95% of our orders have shipped the same day from our own warehouse stock.